Short Review of Tragedy in Crimson

"How the Dalai Lama Conquered the World but lost the Battle with China" By Tim Johnson. 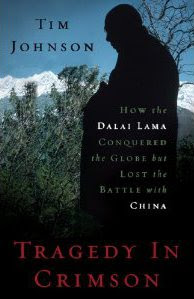 This book is well worth reading and packed with a diverse set of accounts of experiences with Tibetans and Chinese both inside and outside of China.  Each chapter focuses on a different aspect of the Tibetan Issue with subjects as diverse as the view point of the Tibetan nomads, The Diaspora, internecine conflict within Tibetan Buddhism,  the Dalai Lama and his successor and the Chinese Government and their 'totally correct' policies.

Many fascinating points are made by Mr Johnson who is drawing on his 10 years experience in China.  He notes that western journalists based in China will not usually publish critical stories about the Chinese government for fear of loosing their assignment for which much time and effort has been invested.  The chapter on the Princess is of interest as she could be the link between Tibetans and the Chinese which is currently missing.

In the end the future is hard to predict and the extremes of fragmentation with the chinese government imploding due to reduced economic growth verses the Strong State - continued economic growth with technology providing answers to problems and suppressing dissidents.  The middle way is a move to partial democracy with sustained growth.

A lasting comment on the Chinese government was given by Ai Weiwei as a reaction to a government spokesman saying that 'There were no Dissidents in China'.  Ai Weiwei wrote on Twitter:
posted by Richard
Posted by Bath Dist. Tibet Support at 23:41