A dignified vigil was held by over 20 supporters outside Bath Abbey to mark the 21st birthday of Gedhun Chokyi Nyima, the Panchen Lama of Tibet, who was abducted by the Chinese authorities 15 years ago.

Nearly 30 messages were received from supporters and displayed at the vigil. The messages, for Gedhun and Chinese Minister Du Qinglin, were written on colourful windhorses and strung together to flutter in the wind. The windhorse messages will now be posted to Minister Du.

£90 was collected during the Vigil that will be sent to Tibet Earth Quake appeal.

Other Vigils were held in Manchester and London outside the Chinese Embassy.  See
Tibet Society  for details 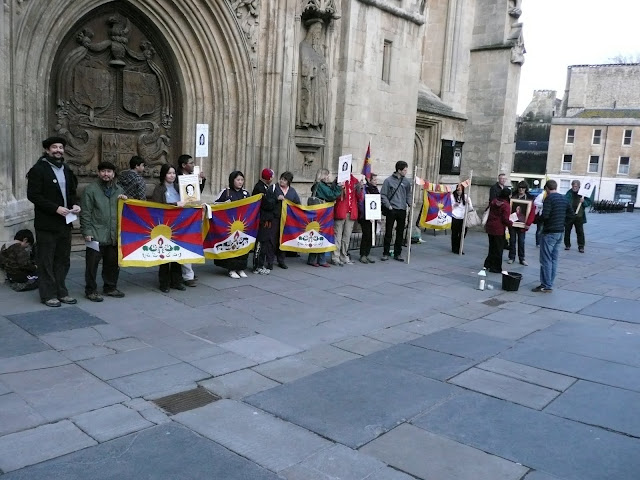 There will be a vigil on the April 25th 2010 outside the Bath Abbey from 6 pm to 8 pm in support of the Tibetan peaceful struggle and to demand the release of the Panchen Lama, who is 21 this year and has been a political prisoner of the Chinese government from the age of 6 years.

This vigil is in solidarity with the vigil organised by the Tibet Society UK outside the Chinese embassy in London on the 25th April.

Posted by Bath Dist. Tibet Support at 22:21 No comments:

£200 raised by 'ACROSS TIBET ON HORSEBACK'

THANKYOU To all who attended Roland Alford’s: Across Tibet On Horseback talk in February.  A total of £200! was made.  Half of this has gone to Tibet Society and the other half went to fund stipends for elderly Tibetans in the Lodrik region of Nepal.  These are elderly Tibetans - former freedom fighters who tried to resist the Chinese invasion in the 1950's and 1960's, fled to Mustang in Nepal and have faced great hardships in Nepal from the collapse of the carpet weaving industry they had subscribed to and most recently the withdrawal of another major charity providing stipends. Tibet Relief Fund is looking to cover extra thousands needed for their survival. The funds we raised will help these elderly people. So many thanks!