2nd March Event: Film - The Sun Behind the Clouds 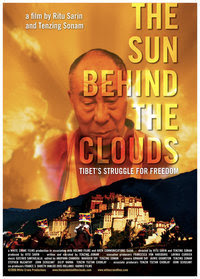 To commemorate Tibetan national uprising day there will be a screening of 'The Sun behind the Clouds'  at Church House, Church Street in Corsham at 7.30pm on Wednesday 2nd March.  Entry is free with teas, coffee and cakes will be available.   There will also be a fairtrade stall.
THE SUN BEHIND THE CLOUDS updates the struggle for Tibetan independence, focusing upon the March 2008 demonstration against Chinese rule, the largest ever since the 1959 take-over of that nation. The Dalai Lama, living in exile in Northern India, is interviewed extensively and given the opportunity to explicate his "middle way," a compromise position he has to date been unsuccessful in getting the Chinese to accept. Supporters of Tibetan independence who are devoted to the Dalai Lama, but who nonetheless feel "the middle way" is an ineffective solution, appear in the film, detailing their more militant position.

See a preview at http://thesunbehindtheclouds.com/


“This film shows what is happening in the hearts of the Tibetan people…it presents a very unusual insight into the situation in Tibet.”
Vaclav Havel, on presenting the award
“…beautiful, stirring and inescapably elegiac…”
Kevin Thomas, Los Angeles Times
“The documentary does a superlative job of examining the half-century dispute over Chinese rule of mountainous Tibet.”
VA Musetto, New York Post
“A potent update on Tibetans‘ 50-year struggle for justice and recognition…essential viewing for anyone who cares about the fate of the mountain region and the legacy of the Dalai Lama.”
Sheri Linden, The Hollywood Reporter
“…a welcome departure from many previous films about the decades-long friction between Tibet and China…an exception in what is not an angry film but a notably calm, well-considered and balanced one.”Robert Koehler, Variety
Posted by Bath Dist. Tibet Support at 23:30