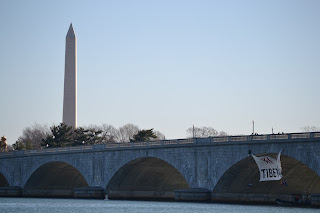 Tibet Activists Unfurl Banner from Arlington Memorial Bridge to Protest Visit of China’s Future President
Dramatic climbing action in U.S. capital sends defiant message of freedom to Fifth Generation of Chinese leaders
Washington – Tibet activists welcomed China’s future President, Xi Jinping, to the U.S. capital by hanging a massive banner which stated, "Xi Jinping: Tibet will be Free" on the landmark Arlington Memorial Bridge. Against the iconic American backdrop of the Washington Monument and the Lincoln Memorial, two climbers - Bianca Bockman (age 31) of Hoboken, New Jersey and Tenzin Jigme (age 32) of Vienna, Virginia - rappelled over the edge of the bridge and unfurled the 52' x 20' foot protest banner. They were later arrested along with Matthew Zaccarino (age 32) of Milford, Massachusetts and Tenzin Yangsel (age 25) of Queens, New York. The action kicked off a day-long festival of protest in the capital by hundreds of Tibetans and their supporters including a rally and march from the Chinese Embassy to the White House, a mass Buddhist prayer offering, life-size puppets, solidarity rallies, and a candlelight vigil.
"As a Tibetan-American born in Tibet, I have to speak out at this critical moment when Xi Jinping and the Chinese government have literally declared war against my people and are shooting peaceful protesters in the streets of Tibet," said Tenzin Jigme, of the International Tibet Network. "Xi Jinping has come here seeking American friendship and approval, and President Obama, as the leader of the greatest democracy in the world, has the power to influence Xi and stop this bloody crackdown."
Vice President Xi Jinping's visit comes as reports that Losang Gyatso, age 19, self-immolated in Ngaba town in eastern Tibet at 2:30pm Beijing Standard Time today. Twenty-four Tibetans have now set fire to themselves in Tibet since 2009, 11 since January 2012, in an unprecedented show of defiance to Chinese rule. In an effort to stop news of the unrest reaching the world after security forces opened fire on protesters calling for Tibetan freedom and the return of the Dalai Lama, the Chinese government has sealed Tibet off to foreigners and journalists.
"Xi Jinping is here representing a regime that is right now engaged in an-all out vicious assault on the Tibetan people, while at the same time directly supporting the Syrian dictatorship in massacring its own people," said Bianca Bockman, member of Students for a Free Tibet. "Is Xi really the person that we want our President to be on a date with on Valentine’s day? I don’t think so. Americans care most about freedom, democracy and basic human rights."
"I believe that all Americans would want to see freedom and independence for Tibetans in Tibet, for Syrians in Syria," said Tenzin Yangsel, of the Regional Tibetan Youth Congress of New York and New Jersey. "Xi Jinping is a representative of a murderous authoritarian dictatorship, and is in fact the last person President Obama should entertain at the White House on Valentine’s Day."
A joint rally in support of freedom and democracy will be held outside the White House tomorrow by a coalition of Tibetan, Chinese, Uyghur, Taiwanese and human rights groups as Xi Jinping and President Obama meet.
Posted by Bath Dist. Tibet Support at 14:10