China 'closes Tibet to tourists' ahead of anniversary

China has closed Tibet to all foreign tourists until the end of July, say travel agents in the region. 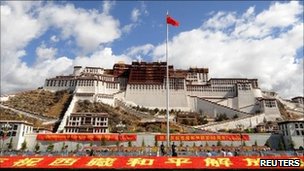 The move is being seen as an attempt by Beijing to prevent unrest ahead of celebrations marking 90 years since the founding of the ruling Communist Party.
Tibet saw a wave of violent anti-China protests in 2008, on the anniversary of a failed uprising against Beijing.
Beijing blamed the unrest on followers of the Dalai Lama, who it said were seeking to separate Tibet from China.
All foreign tourists need special permits to visit the Tibetan region - which Beijing calls an autonomous region - but the authorities have periodically barred all access, citing safety or security concerns.
Travel agents said the latest ban had been issued at least as early as June this year and would run until the end of July.
One agent, who spoke anonymously, said had he hoped the ban would be eased in time for Tibetan Buddhist festivals in August, but that his company had now had to cancel trips.
"We don't know the reasons behind it. Perhaps it has to do with something political, he told Reuters.
"We are disappointed because we lost a lot of money. We just have to tell clients we are sorry."
Another travel agent, at a hotel in the Tibetan capital, Lhasa, said the ruling was connected to the 90th anniversary celebrations.
"Even with a tour group, foreigners cannot come," said the agent.
A Foreign Ministry spokesman told reporters he had "no understanding" of the ban, said Reuters.
Continue reading the main story

Tibet is largely closed to foreign media, so reports are difficult to verify.
But China is wary of the influence of foreigners in the politically sensitive region.
The 2008 unrest was the worst in the mountainous region in 20 years - China responded with a massive military crackdown and closed the region to foreigners.
Beijing said at least 18 people, mostly Han Chinese, were killed, but Tibetan rights groups put the figure at about 40.
Many Tibetans say Beijing is attempting to dilute their minority culture, by encouraging huge numbers of majority Han Chinese to resettle there.
Beijing says it is bringing development and improving the standard of living in the area.