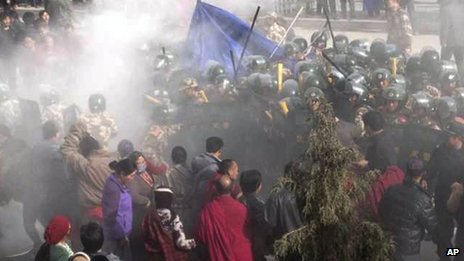 The most recent self-immolation also took place in Gannan prefecture
Police in China's Gansu province are offering rewards for information about planned self-immolations by Tibetans.
The authorities in Gansu's Gannan prefecture say recent immolations affected social stability.
They add that those who tell police about planned immolations will be awarded 50,000 yuan ($7,700; £5,491). Information about those who organise immolations will also be rewarded.
Dozens of people have set themselves on fire since such protests began in 2009.
The majority of them are believed to have died in the protests. At least two are believed to have died since Monday, the latest in a recent spike of Tibetan protests inside China.
Continue reading the main story

A notice issued by Gannan police says the immolations have "seriously impacted social stability and harmony as well as people's ability to live and work".
It says: "Anyone who reports and informs the legal authorities on the people who plan, incite to carry out, control and lure people to commit self-immolation will be awarded 50,000 yuan."
It also adds that anyone who provides genuine information about what it calls the "black hands" - referring to those behind four recent self-immolations - will be awarded 200,000 yuan.
This is believed to be the first reward offer of its kind in the region.
Gannan has been the site of a number of self-immolations this year. On Monday a man, believed to be in his 50s, died after he set himself on fire near the Labrang monastery. A day later another Tibetan set himself on fire in the same region.
China's authorities have so far proved unable to halt the self-immolations.
China's leaders blame the Dalai Lama, the Tibetans' exiled spiritual leader, for inciting the self-immolations and encouraging separatism.
He rejects this, and both activist groups and the Tibetan government-in-exile say the self-immolations are protests against tight Chinese control of the region and religious repression.
Posted by Bath Dist. Tibet Support at 15:15